You can't buy a nativity scene from Lego but you can make one. 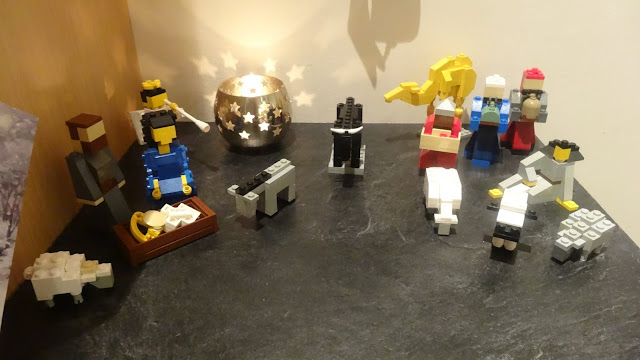 (Thanks to Marlena for the photo).

I am not the first to make a Lego Nativity scene. Others have paved the way for me, in "minifig" scale (the ubiquitous smiling Lego men) and in the larger "miniland" scale that is used throughout the Legoland, and in other scales.

I didn't have time to present a new character every day throughout December. So I craftily arranged to bring out a few characters each Advent Sunday - starting with one sheep ... then a shepherd with some more sheep ... then the Wise Men, and finally the Holy Family. The picture above was taken on Christmas Eve, and the picture below was taken a few days before. 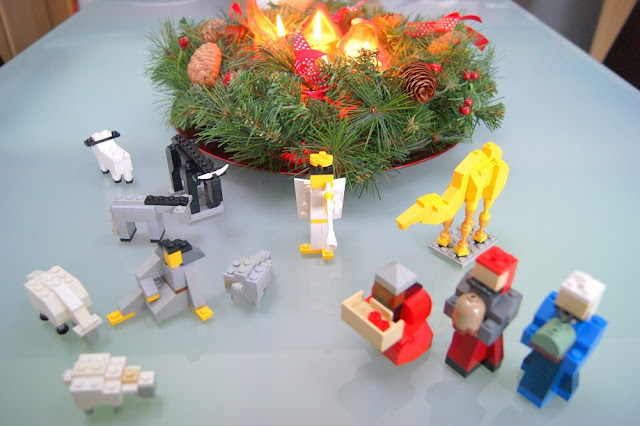 There's a bit of a story here. My colleague had ordered for her boyfriend a Star Wars R2D2 alarm clock which projects the time onto the ceiling. There are a number of variants of this thing on the market, and she ordered the one with good reviews about 4 weeks ahead of Christmas so that it would arrive in time.

So yesterday (22nd December) when it hadn't arrived yet, she phoned up the supplier, who said that it must have got lost in the post (I've heard that excuse before, and I don't believe it). They also said they were out of stock and wouldn't be getting any in until January. My colleague was not happy.

So I put this little vignette together to try and lighten her day today.

Which it did.  This is the droid you are looking for.
Happy Christmas. 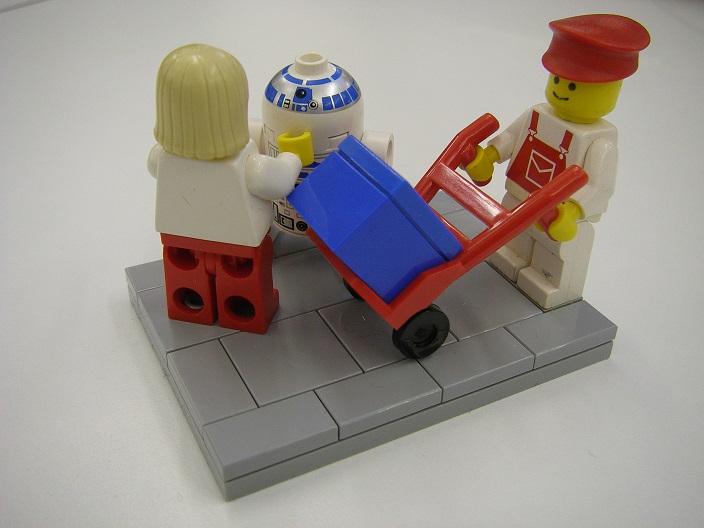 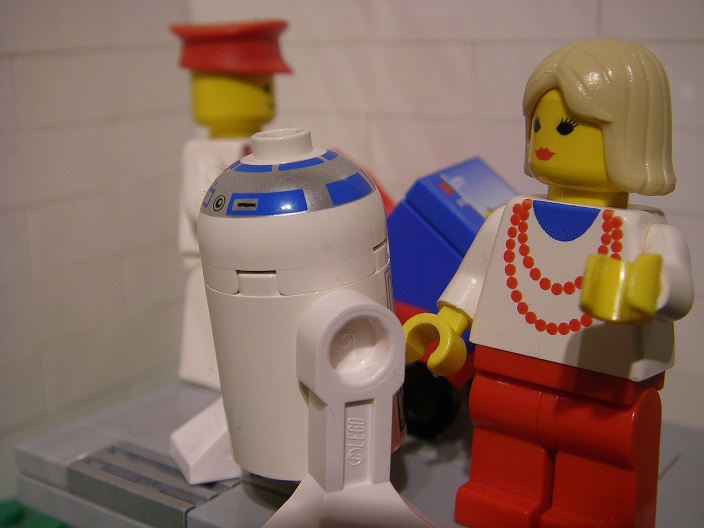 Once upon a time, nobody thought much about how to define time. We measured the passing of a day and a year and the cycles of life. History was written down with reference to important figures, usually the reign of kings or emperors, prophets or other very significant events. This has served us well for thousands of years … until now.

In the 1970s, a strange creature appeared, able to store knowledge in unprecedented ways. This creature had a curious notion of time, which it measured with reference to itself. It recorded time as the number of seconds since its official birthday, the start of the New Year 1970, according to the popular calendar in existence where it lived.

This new creature was expensive to feed. It didn’t have much space to remember all the dates and times that it needed to keep. The designers of this creature – for it was indeed a created being – could only get it to store numbers up to 2 billion and eight (note 1). That many seconds is 68 years, which surely must be enough for all practical purposes.

As the years rolled by, the creature stored more knowledge about real people. The designers realised they needed to refer to dates beyond those 68 years: pension payments, for example, for the younger designers, who were due to retire during or after 2038.

For a few years, the designers of a similar but older creature were distracted by another problem which recorded years differently. This creature stored date information with reference to the popular calendar in existence where it lived, but it only knew about years from zero to 99. So children due to be born a year hence were already 99 years old. And some people were due to retire in the past.

Once that creature had been tamed (at considerable expense, and not without controversy, for some people maintained that the creature was not wild at all) the designers were distracted with other creatures, mostly small pets that made interesting noises and played fun colourful games. Many of these pets died after a few short years, and were quickly replaced by newer pets. But whilst many designers were distracted by puppies and kittens, some had returned to the original problem.

One would imagine that something as universal as time would have a simple solution. Designers of the new generations of The Creature were not bound by the same restrictions as their predecessors were. They have argued long into many nights to find the right way getting the Creature to record time. Their answers are varied and beautiful, and yet there is not one universal answer to the question of time. Different Creatures measured time and dates from different starting points, and in different ways.

Fortunately, this situation meant there was plenty of work for the designers. They developed new design tools, new ways of communicating with the creature and new ways of making it do useful work, – and whole industries grew up converting from one set of tools to another. For most practical purposes, the Creature was now able to count far beyond a billion and six, and designers had a way of counting time so far into the future that the future of the future would called to account. (note 2).

(Note 2) Counting 2 to the power of 64 seconds allows us to measure time for the next 585 billion years. This must surely be enough for all practical purposes, for our own sun is not expected to last longer than about 5 billion years.

Brussels is supposed to have a rather good Christmas market. In Grand place was a grand Christmas tree and a rather good nativity with real sheep grazing inside. The Christmas market itself was in the streets between there and Bourse. Maybe it was the rain, maybe the curfew, but I found it underwhelming, especially compared to the markets in many provincial German towns.

On my way to visit a friend, I passed The European Commission building - large, glass, curved front  - where the wheels of democracy turn very slowly. Over the road, the Old Hack Pub, and near it Kitty o'Shea's, where the borderless lubricant of alcohol flows very smoothly. They serve Guinness.

Just look at 11 Square Ambiorix. Victor Horta in a building. Maison St. Cyr, built by Art Deco architect Gustav Strauven, for himself, stands as a brash statement of über-art amid the merely interesting architecture around it. Apparently the building is renovated, but the mesh across the nain doora suggests a slightly different story. It isn't open to visitors though.

Brussels Midi/Zuid station: gateway to the world. Trains leave for France, Germany, the Netherlands, beyond, and to Britain, that Island people who refuse to understand what freedom of movement means. And whose borders remain guarded as the rest of Europe tries to live out its promise of freedom.

St Pancras.  We are sorry to announce that the 20.08 to West Hampstead has been cancelled. We apologise for the inconvenience caused.  Welcome to Britain.
No comments: