A trip to France

In a week when France was in the international papers for all the wrong reasons, and a million French people took to the streets in the most dramatic protests for two generations, I had a business trip to a small town in Bourgogne, about an hour North of Lyon. By Monday afternoon I had just finished booking the last details for my journey, when I received an email from BA to say that my flight had been cancelled. A moment of panic. Call my boss. He tells me to panic. And to call the customer. They advise that I fly to Geneva, only 2 hours away by car, and there should be no problems from there. They recommended that I do not attempt to go via Paris, and most certainly don't try traveling by TGV.

An hour and £650 later, my new flight is booked - for the following day - along with car hire. Within 24 hours I am on my way. Nice to see the inside of Heathrow Terminal 5 - large, airy, and nothing to do except shopping. Do I really need to get myself that iPod just now? How about blowing every penny I've ever earned on a watch? My flight is delayed ...

It turns out that the flights to Geneva are delayed because the French Air Traffic Controllers wanted a bit of strike action too. Anything that would have flown through French airspace therefore has to go the long way around: East towards Cologne then down the Rhine, over Basel and back along most of the length of Switzerland. It was strangely comforting to know that Deutsche Bahn were running test trains into St Pancras on the same day, but I was annoyed that I'd missed it.

I know Geneva very well. I spent three years of my childhood here, and have visited regularly ever since. For my rental car I made sure to get something with a large enough tank that I would not need to fill up in France. They offered me a diesel Clio, which did the trick nicely. I still tried to get into it on the wrong side though! Darkness had fallen by the time I hit the Autoroute A40, which was a great shame because the countryside around here is just gobsmacking (search "Nantua" for example). Occasional teasers were visible through the rain, as the road shot round a valley on a concrete viaduct, and the lights of an idyllic village could be seen tucked into the valley. Shame their view has been spoiled by the nice concrete viaduct I was on. Up into the mountains, through endless tunnels, long stretches of steep downhill, escape routes every so often, and warning signs in four languages.

Eventually the terrain flattened out, but it was still dark and still raining. The A40 seemed to go on forever, eventually joining up with the A6, and after a very long bit between junctions, I reached my destination.

The first day of meetings went well. I drove back through the town centre as it was still light, just to get a bit of a view of this town. Nothing particularly remarkable about it, though I later learned it is where photography was invented and it is famous for its fog. The contrast between this sleepy small country town in France, and the riots shown on television was striking (pun intended) - here it seems the biggest impact is that the fuel stations are out of petrol and diesel. Things seem much worse in the big cities.

At the end of the second day of meetings, I managed to get away by 5:30pm, and hit the autoroute. I was determined to get back to those awesome mountains before it got dark, and the Clio didn't dissapoint. The hills of Bourgogne, the occasional traditional French buildings, slowly developed into bigger hills and less houses as I put the kms behind me, and there in the distance some real hills. "Genève" was signposted all the way, which was a great relief. What the autumn grey-browns did to mute the colours of the countryside was more than compensated for by the sunset. It had been a spectacular blue sky day. As the sun set, I started to rise into the mountains. Heavy lorries in the crawler lane, my ears popping as we went up and up and up ... then the terrain opened out on a plain, with further mountains in the distance. A long tunnel, which shot out directly onto the viaduct suspended in the sky against breathtaking cliffs ... the tiny model-like village of Nantua far below. The autoroute continued to curve around the valleys, arch across them in vast concrete ribbons. As we approached the péage before the Swiss border, it was dark. The last part of the darkening sky above a sillhouette of the mountains where I lived as a little boy.

Entering Geneva wasn't quite so romantic. I managed to miss the hotel and shot past the airport. I came off the autoroute, and headed back ... but not quite enough, crossing the border again and nearly went into Ferney Voltaire. I was back in France, and heading back on the Route Departmental towards St Genis Pouilly and Lyon ... back the way I'd come. I knew I needed to go as far as Thoiry then turn back to Geneva. but at Thoiry, I went straight on. Five kms further, I saw a sign I hadn't seen in a very long time, the village where I grew up, so I went to have a look. It was indeed dark by the time I got there. But there was the railway line (much closer than I remembered it), the school, opposite the triangular green by the Mairie, the church, and the road up to where we used to live. The huge gates were shut, and I didn't have the nerve to go and say hi at 8pm. But I stopped a bit further on, got out and chatted to a man walking his dog. He turned out to be an Englishman working at the same place my father did 35 years ago. The farmer was still there next door, no longer milking cows but just sawing wood, and the village hadn't changed as much as some places nearby.

And so back to Geneva, past the border crossing near CERN that I remember so well (some things just don't change). I got lost in roadworks in Meyrin, trying to find the airport again, eventually found my way out of Meyrin, back on the main road, and found the hotel. Once I'd settled in my room I went to find dinner. Disappointed with Holiday Inn : they don't serve dinner here. They recommended the restaurant at Mövenpick Casino next door. Turns out to be (one of) the best Japanese restaurants in the world. I can't spell the thing I ate, but the chef prepared it on a hotplate right in front of me which was most interesting, setting light to half the food in the process. Most entertaining, very tasty, and certainly not the "diner leger" that I'd asked for, but I had no grounds to complain about the food.

In a week in which France has been in the international papers for all the wrong reasons, and Britain has announced austerity measures that will cost half a million people their jobs, I have supported the private and public industries of four countries: a taxi company and an airline in Britain, the German air traffic controllers, a restaurant, a hotel and a car hire branch in Switzerland, a hotel, the autoroute company (through toll charges) and a few cafes in France. Is this what Cameron means by getting private enterprise to drive the recovery, or is it Brown's "Spending your way out of Recession" ?
No comments:

High Tide and Low Tide on the Thames

One of my kids had a bit of homework about the Thames Barrier - that amazing bit of rotating technology that keeps Spring Tides from flooding London. The whole concept of a river being tidal seemed to confuse them. So I took some pictures. 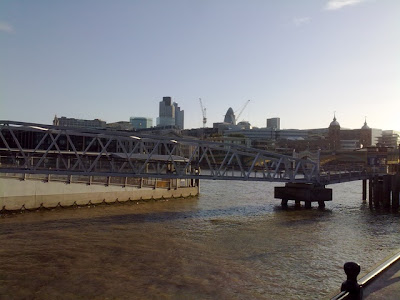 The first picture was taken at 08:30 am on 17th September 2010, as high tide was turning. This is taken from just outside the Globe Theatre, looking North-East across the river towards Cannon Street station and The City of London (you should be able to see the Gherkin). The thing in the foreground is the jetty for the river-bus. 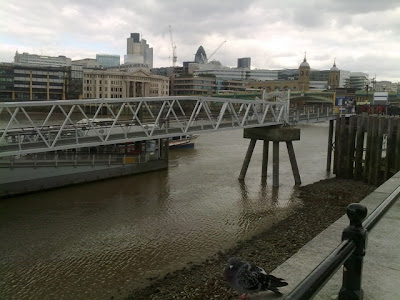 The lower picture was taken about 2:15pm just before low tide, at the same place. A handy pigeon asked to pose for the picture, and you can see the river-bus too. The tidal range at London Bridge is about 5 metres (and can be as high as seven metres). That's an unbelievably huge amount of water that washes in and out twice a day.
No comments:

Seen on the Thames today 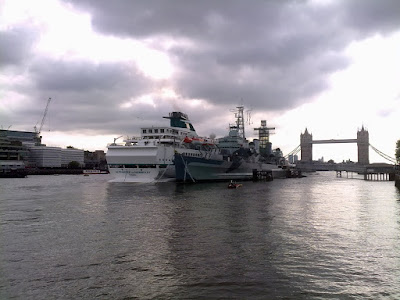 A cruise liner was moored up against HMS Belfast on Monday 8th June. Looks like Alexander von Humboldt. There were lots of German families around Tower Bridge buying ice cream.

By 08:30 on Tuesday 9th June, it had already gone (presumably at high tide).
No comments:

I know a few things about the oil industry and about offshore engineering - enough to have a vague understanding of the technicalities of what is happening in the Gulf of Mexico with the current oil spill. But what I understand very well is that the people trying to fix the problem have a really difficult job on their hands. What they are trying to do is a bit like stopping the flow out of an industrial pressure washer by shooting sand into the nozzle, except that it's about a hundred times the size, they can't switch it off, and the "hose" is all inaccessible in rock under the sea bed, and the stuff coming out is toxic, and it's hot (200 degrees C), and at an unbelievable pressure of 700 times atmospheric pressure, and all this on the ocean floor some 1.5 km below the ships from which they control their robots to do all the work. The whole world is watching what they do, and is justly horrified at the amount of crude belching out of the ground. Thousands, perhaps millions have expressed their anger that not enough is being done. The press, the lawyers and the politicians are circling like vultures, waiting for that exclusive, that tidbit of juicy news, that case that will allow early retirement. And under these conditions, the best people in the industry must certainly feel the pressure to stop the leak.

The world has been fortunate in recent years that there have not been other gushers like this one. Unfortunately this means that there are no "experts" to turn to, simply because nobody's ever had to do this before. The engineers and technicians involved had better be the best that BP can find (Red Adair famously said "If you think it's expensive to hire a professional to do the job, wait until you hire an amateur") so if they are finding it difficult to plug the leak, then it must be really hard to do. To these engineers working under such media pressure with such an engineering challenge and such disaster potential, I have one word:

Do we take enough time out to enjoy the amazing things around us ...

... and to watch whilst amazing things happen around us ?
No comments: