One of my colleagues celebrated a birthday yesterday. To maintain the illusion of youth, he suggested that we start counting years in hexadecimal rather than decimal.

Although most of the world counts in base 10 (decimal), other bases have been used historically as well: from base 12 we get the concept of dozens, 12 inches in a foot, and 12 old pennies to a shilling. 12 is very useful for trading, cooking and measuring because it can be divided by 2, by 3, by 4 and by 6 (whereas 10 can only be divided by 2 and by 5). The sexagesimal system (base 60) originates in ancient Sumeria, and is still used today on our clocks and in the way we keep time.

The most important question in the world is of course whether I can remain 21 for the rest of eternity. Can I be 21 forever just by changing the base of my counting system?

Most people are happy to use decimal until their 21st birthday. Upon reaching 22 (decimal), most people prefer not to divulge their true age in polite conversation. So, can I write my age as "21" by assuming a different base system? 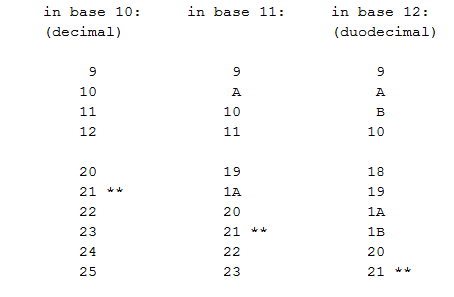 By the time I get to my 60's I should really be counting in hexadecimal, which is quite nice really, because I'll still be in my '30s (hex) when I'm 63 (decimal).

For practical purposes, however, lying about one's age is hard work. I'm relaxed enough to tell people how old I really am, and just use decimal for everything - especially inches and minutes.*

* You will turn 11 million minutes old about 2 hours 40 minutes into the day before your 21st birthday (assuming counting in base 10).
No comments: